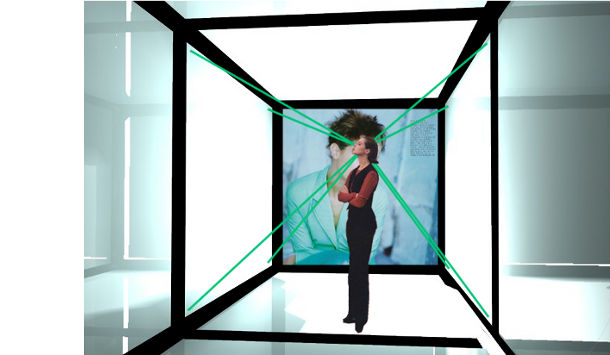 Objectification is our ability to control reality, to place images of ourselves within reality which are independent from ourselves.  This is what objectification is about, at the root, is seeing ourselves.  Within the void, standing on the infinite beach staring out at the infinite sea, we see only our temporality, our inability to change, to make consequence, to conquer death.  And it is by placing within this void images of ourselves that we attempt to assure our own existence.

But it is our ability to control reality, to design, which objectifies our existence, strips our humanity from within us, and fills the void around us, drowning us within our own attempt to see ourselves.  We no longer inhabit the void, but rather a void filled with images of ourselves, with markers of existence, with tombstones, churches and photographs.  And as we fill this void, as we extract from ourselves our perceptions and our humanity, our life and our beliefs, the only implication can be that we have less within ourselves, that we become void within our objects, spaces between our images of ourselves.

In order to continue our belief that we are non-void, we must inhabit the void.   For to be the void inhabiting the non-void is to be nothing; no room is left for humanity and for existence.  This thesis builds from the belief that we are non-void inhabiting the void.  That by not objectifying ourselves, by not filling the void with non-void, we allow ourselves to exist within the void.  By not creating reality we assure our own. By not objectifying our thesis, we leave ourselves with our thesis.

It is the blank canvas and cold hard examination room, which cause in us the urge of life, the artistic impulse, the kinetic potential. The feeling in the viewer is active and induced rather than empathetic and distant. It is in the coldest and most comfortless rooms that we feel ourselves most. By not imbedding the object with emotion, we leave those unspeakables unspoken, and those undescribables undescribed. The void is more saturated with kinetic potential the more the potential energy is intentionally left untapped.

It is by objectifying as little as needed that we achieve the greatest benefit to ourselves.  It is less systems, smaller systems, invisible systems which allow us to achieve the greatest effect while giving up the smallest piece of ourselves. Satellites, radio towers, microwaves, light, sound, these give us the desired effect without clogging our reality with objects.  These are the most efficient systems. These utilize the void as a medium, rather than carving out their own chunk of it.  They are, in essence, pure effect:  the nullification of architecture.

The object must abandon style and embrace the fluid effect. Physical objects can not change fluidly. They leave us with archaic and stagnant images of ourselves. Architecture is obsolete before it is built. Objects must be a system that supports effect. The effect must be total and all encompassing. Minimal design allows for total immersion of a fluid effect. It does not imbed our thoughts within the object.

Minimal design makes its own failure extremely evident. It makes the viewer aware of themselves. The person within the room of nothing becomes the difference, the failure, the reality within the design.